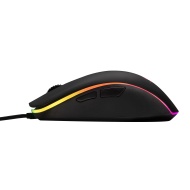 The crazy visual flair comes from the fully customizable 32 zones of lighting, each zone being a little bit of the illumination glowing around the mouse's perimeter. Each zone is a segment, about half an inch long, of the encircling strip. On a mouse,...

Software wouldn't launch on some test systems. Lefties won't be able to use side shortcut buttons easily.

The HyperX Pulsefire Surge is an adequate ambidextrous gaming mouse whose snazzy, encircling RGB lighting sets it apart, but its software needs some fixes.

A surge of light

If you’re looking for a well-performing mouse that won’t break the bank, you won’t find anything much better than the HyperX Pulsefire Surge RGB.

HyperX has made serious improvements in their latest mice lineup by upgrading the existing ones with a better optical sensor. The Pulsefire Surge uses the PMW3389 and obtains an impressive score even if not the best in sensor performance. Apart from...

HyperX Pulsefire Surge Mouse Review: All of the Lights

In my observations, HyperX is usually at its best when it streamlines gaming peripherals and knocks a few (dozen) bucks off the price in the process. The Pulsefire Surge demonstrates that the company is just as capable of producing full-featured...

The HyperX Pulsefire Surge is a joy to use and gorgeous to behold, featuring a high-quality sensor and 32 distinct lighting zones.

The HyperX Pulsefire Surge RGB seems to offer the perfect balance of performance and aesthetics, boa It's only HyperX's second gaming mouse – great if you love RGB!

HyperX have ventured into the fierce world of gaming mice, releasing the Pulsefire from its cage. Featuring red lighting, a Pixart sensor and comfortable shape, how well have they done?...

Kingston's line of HyperX headsets and keyboards has aimed to cut through a lot of the pomp and circumstance surrounding gaming peripherals, and the company's mouse follows the same theme. The Pulsefire is terrifically simple, and while its lack of...

Comfortable ; Simple setup ; Works in all genres ; Nothing extraneous

The Kingston HyperX Pulsefire is a comfortable, no-nonsense mouse that you can plug in and use almost instantly with any game.